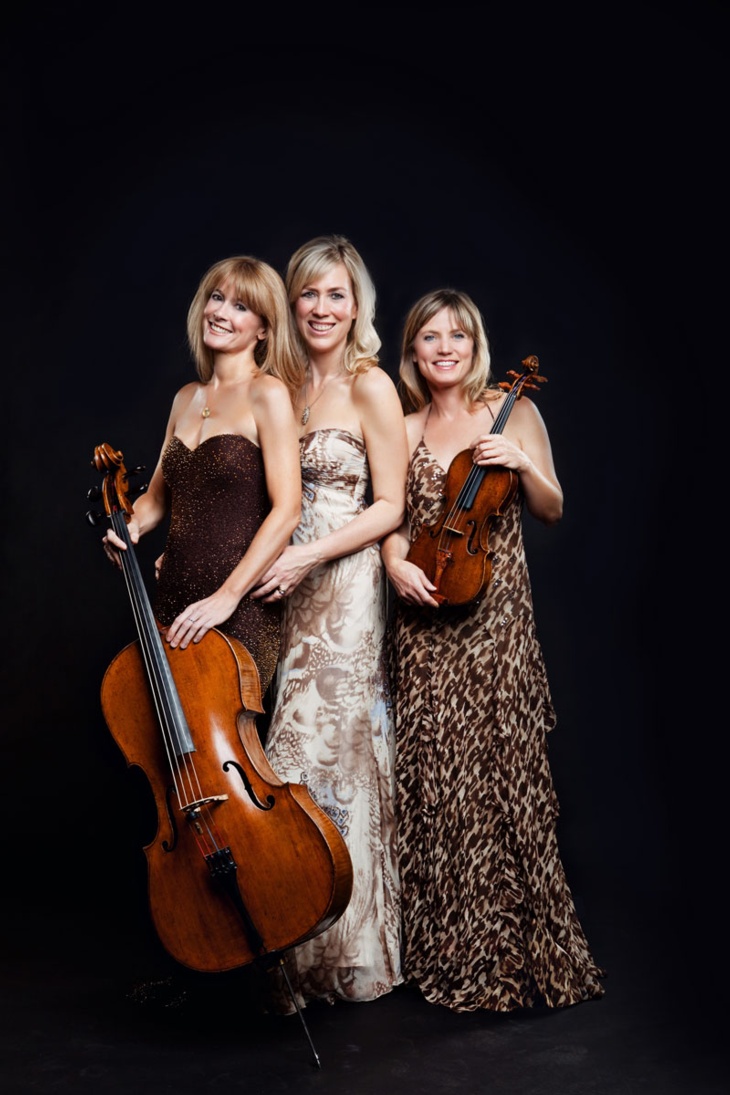 The most sought after trio in the world, the Grammy nominated Eroica Trio enraptures audiences with flawless technical virtuosity, irresistible enthusiasm and sensual elegance. The three women who make up this celebrated ensemble electrify the concert stage with their passionate performances. The New York Times writes, “There is an edge of the seat intensity to every note they produce."

The Trio won the prestigious Naumburg Award, resulting in a highly successful Lincoln Center debut and has since toured the United States, Europe, Middle East, South America and Asia. While maintaining their demanding concert schedule, the Eroica Trio has released eight critically lauded recordings for Angel/EMI classics Records, garnering them multiple Grammy nominations. The first all female chamber ensemble to reach the top echelon of the field, the women of the Eroica Trio has shattered the age-old gender barrier, leading the vanguard and inspiring many to follow.

The unique history of the players of the Eroica Trio goes all the way back to childhood. Sara Sant'Ambrogio and Erika Nickrenz first met at age 12, when Erika came to study with Sara’s Grandmother, the founder of Red Fox Music Camp. Two years later, Sara collaborated with violinist Sara Parkins at the renowned Meadowmount School of Music, where they became fast friends, and later became roommates when they were both students at The Curtis Institute of Music. Sara Parkins and Erika Nickrenz also met in their teens, playing together as students at the Pre-College division of The Juilliard School and at the Tanglewood Music Center. That same year the Eroica Trio was formed at The Juilliard School. This intricate web of early connections helped forge a lifelong bond between the three women of the Eroica Trio.

The Eroica Trio performs the Beethoven Triple Concerto more frequently than any other trio in the world, having appeared with renowned symphonies such as Chicago, St. Louis, San Francisco, Mostly Mozart Orchestra, Nashville, Indianapolis, Atlanta, Pittsburgh, Houston, New Jersey and Seattle. In addition, The Trio has performed the work abroad with Orquesta Sinfonica de Euskadi in Spain, Haydn Orchestra in Italy, with the Royal Philharmonic Orchestra and Budapest Symphony in Germany, and on multiple tours in the United States with the Cincinnati Symphony as well as with the Prague Chamber Orchestra. The Eroica Trio’s recording of the Beethoven Triple with the Prague Chamber Orchestra was so successful it landed this piece on Billboards Top 20 for the first time in recording history. The Trio appeared on the German television program "Klassich!" performing the Beethoven Triple Concerto with the Munich Symphony, which was aired throughout Europe. A multi-city tour of North America with the Vienna Symphony Orchestra, under the baton of Maestro Fabio Luisi, culminated in a sold out performance on the “Great Performers at Lincoln Center” series in Avery Fisher Hall in New York City.

Highlights this season include a mini-series, Eroica Trio and Friends, in Calderwood Hall in the Isabella Stewart Gardner Museum with principal Clarinetist of the Atlanta Symphony Laura Ardan and Violist of the Emerson Quartet, Lawrence Dutton. Another exciting project for the trio, Tango Ahora, featuring two new Concerti for the Trio and Bandoneon by Argentinean composers Emilio Kauderer and Daniel Binelli, recording in Prague fall of 2106 and premiering Kauderer’s Concerto with the Orquesta Sinfonica Nacional in Buenos Aires in March 2017. Along with tours of the continental U.S., Mexico and Hawaii, the trio will play a recital in Symphony Space in NYC as part of the “Cutting Edge” series will include works written for them by Bruce Wolosoff and Pulitzer Prize winner Kevin Puts.

The Eroica Trio has appeared on numerous television programs, including ABC's The View, CNN's Showbiz Today, CBS and ABC News, the CBS Morning Show and Saturday Morning, A&E's Breakfast with the Arts, The Isaac Mizrahi Show, Pure Oxygen, Bloomberg TV and Fox's The Crier Report. Eroica!, a special documentary about the Trio and its commissioning of a new triple concerto by Kevin Kaska, premiered on the PBS series Independent Lens and has had multiple airings worldwide. The group has been featured in such magazines as Elle, Glamour, Vanity Fair, Detour, Marie Claire, Gotham, Entrée, Bon Appétit, Time Out New York, Gramophone, Piano, Vivace, Auditorium, and Chamber Music. In addition, the ladies have graced the covers of magazines as diverse as Fanfare, Cigar, Strings, Tall, and Strad. Grand Marnier® created a new cocktail dubbed "The Eroica" which was unveiled for the release of their "Pasión" recording. Chateau Sainte Michelle, a vineyard in Seattle, also named one of its Gold Medal winning Reislings in honor of the Trio.

Whether the Eroica Trio is interpreting the Baroque Masters, the power and strength of Beethoven, the jazzy tunes of Schoenfield or the Bluegrass toe tapping rhythms of Mark O’Connor, their performances are deeply personal and continue to thrill audiences around the world. To quote the San Francisco Examiner, “It has been decades since this country has produced a chamber music organization with this much passion...”