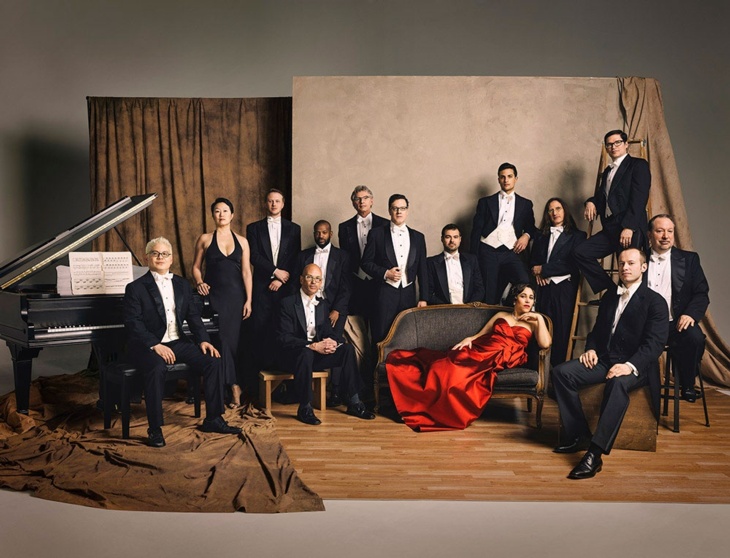 In 1994 in his hometown of Portland, Oregon, Thomas Lauderdale was working on political campaigns, with the intention of eventually running for office. Drawing inspiration from music from all over the world – crossing genres of classical, jazz, and old-fashioned pop – and hoping to appeal to conservatives and liberals alike, he founded the “little orchestra” Pink Martini “to bring a little bit of “Breakfast at Tiffany’s” to political fundraising for causes such as civil rights, affordable housing, cleaning up the Willamette River, libraries and education, among others.

One year later, Lauderdale called China Forbes, a Harvard classmate who was living in New York City, and asked her to join Pink Martini. They began to write songs together. Their first song – “Je ne veux pas travailler” or “I don’t want to work” – became an overnight sensation in France, was nominated for Song of the Year at France’s Victoires de la Musique Awards, and to this day remains a mantra for striking French workers. “Pink Martini is an American band, but because we spend a lot of time abroad we have the incredible diplomatic opportunity to represent a broader, more inclusive America . . . the America that is the most heterogeneously-populated country in the world.  Except for Native Americans, all of us are immigrants from every country, of every language, of every religion,” says Lauderdale.

Featuring a dozen musicians with songs in over 25 languages, Pink Martini performs its multilingual repertoire on concert stages and with symphony orchestras throughout Europe, Asia, Greece, Turkey, the Middle East, Northern Africa, Australia, New Zealand, and North and South America. Pink Martini made its European debut at the Cannes Film Festival in 1997 and its orchestral debut with the Oregon Symphony in 1998 under the direction of Norman Leyden. Since then, the band has gone on to play with more than 70 orchestras around the world, including multiple engagements with the Los Angeles Philharmonic at the Hollywood Bowl, the Boston Pops, the National Symphony at the Kennedy Center, the San Francisco Symphony, the Chicago Symphony, the Minnesota Orchestra, the Seattle Symphony, the Cleveland Orchestra, and the BBC Concert Orchestra at Royal Albert Hall.

Other appearances include the grand opening of the LA Philharmonic’s Frank Gehry-designed Walt Disney Concert Hall, with return sold-out engagements for New Year’s Eves in 2003, 2004, 2008, 2011, 2014 and 2016; four sold-out concerts at Carnegie Hall; the opening party of the remodeled Museum of Modern Art in New York City; three sold out shows with the Sydney Symphony at the renowned Sydney Opera House; sold-out concerts at Royal Albert Hall in London in 2011, 2013 & 2016, sold-out concerts at Paris’ legendary L’Olympia Theatre in 2011 and 2016; and Paris’ fashion house Lanvin’s 10-year anniversary celebration for designer Alber Elbaz in 2012. In 2014, Pink Martini was inducted into both the Hollywood Bowl Hall of Fame and the Oregon Music Hall of Fame.

Television appearances include The Late Show with David Letterman, Late Night with Conan O’Brien, The Tonight Show with Jay Leno, Later with Jools Holland, and a feature on CBS Sunday Morning. The band created a nationally broadcast 2015 NPR holiday concert special, Joy to the World: A Holiday Spectacular, and has been featured on multiple New Year’s Eve broadcasts on NPR’s Toast of the Nation.

One of the most significant moments in the band’s 23-year history began to formulate at a luncheon for the Central Oregon-based art camp Caldera at the Portland Art Museum in 2010.  In his introduction of Myrlie Evers-Williams -- civil rights leader and widow of Medgar Evers, who was assassinated in Jackson, Mississippi in 1963 -- Dan Wieden revealed that, as a young person growing up in Mississippi, Myrlie was a classical pianist with dreams of playing Carnegie Hall.  Two years later, Pink Martini invited Myrlie -- at age 79 -- to realize her childhood dream.  In a sparkling red dress provided by Ikram Goldman of Chicago, and with her family and friends in the audience, Myrlie not only played the piano; she sang George Gershwin’s “The Man I Love” to an instant standing ovation.  Myrlie’s debut was documented by filmmaker Albert Maysles, of Grey Gardens fame.

© Festival of The Arts BOCA 2020 | Website development by RiS