An All Star Orchestral Event 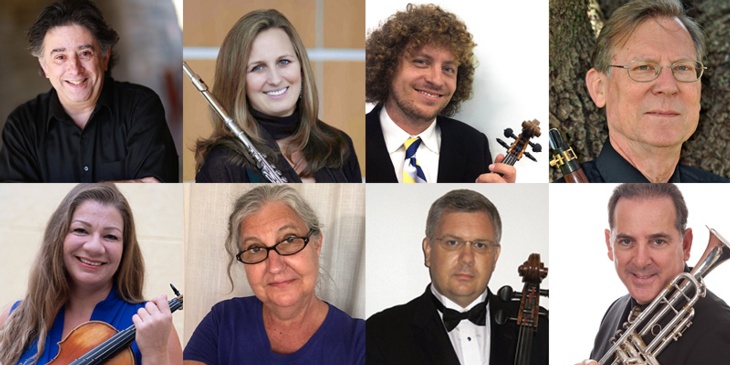 When the Festival Boca team decided to go ahead with a virtual 2021 season, they knew they had to include Music Director Constantine Kitsopoulos and the Festival Orchestra, who have anchored the Festival’s programs over the last 15 years. But, in the age of social distancing and masking, that posed unusual challenges.

So we decided to gather together a small, vibrant ensemble comprised of some of the Orchestra’s principal players – an ensemble that could deliver a big sound from one of Boca's most beautiful and iconic spaces, The Addison. By using the most advanced technology, we would present a virtual concert that was both powerful and memorable.

And what could be more fitting than a program of works from the time Addison Mizner (1872-1933), the renowned architect who left such an indelible mark on Boca Raton and South Florida?

Yet the moniker we gave this group of musicians – “The Festival All Stars” – should not be misinterpreted. These musicians are not simply All Stars among Festival musicians, but in the classical music world as a whole. All are highly accomplished musicians who perform regularly throughout the US and beyond. Here are just a few tidbits from their biographies (with links to their longer artistic histories).

Karen Fuller is principal flute of several South Florida orchestras, but also founded the Palm Beach Chamber Music Festival and has performed throughout the US with the likes of the American Ballet Theatre, the Royal Ballet, and the New World Symphony.

Cellist Christopher Glansdorp is principal cellist with the Palm Beach Opera Orchestra as well as with The Symphonia, and has toured with the New World Symphony in Japan and the UK, while keeping an active performing schedule with orchestras throughout the US, including as a studio musician on recordings from Placido Domingo to Ricky Martin, from Gloria Estefan to Barbra Streisand.

Clarinetist Richard Hancock is currently Principal Clarinetist of The Symphonia, Orchestra Miami, the Opus One Orchestra (Miami City Ballet) and the Atlantic Classical Orchestra, and for 20 years filled that role for The Florida Philharmonic Orchestra. Before coming to South Florida, he played in orchestras from Chicago to Mexico City.

Dina Kostic, violin, is assistant Concertmaster with the Symphonia and Principal Second Violin with Opus One Orchestra, the Atlantic Classical Orchestra, and Nu Deco Ensemble, and she has performed at summer festivals from Italy and Japan to Colorado.

Violist Carl Larson has performed with orchestras and ensembles throughout the US, and toured with everyone from Barry Manilow to Dolly Parton. He also holds degrees in both Mathematics and Viola Performance.

To reserve your seat for an evening with all these wonderful artists, click here.