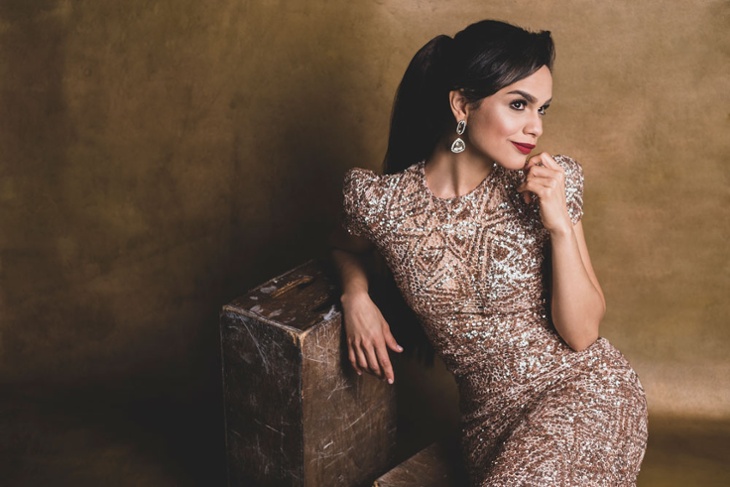 If this whole opera thing doesn’t work out, Larisa Martínez always has her bachelor’s degree (with high honors) in Environmental Sciences to fall back on.

But let’s be clear, the opera thing is going very well.

For the last three years, Martínez has toured with tenor Andrea Bocelli, debuting at Madison Square Garden, Hollywood Bowl, and throughout North America, South America, and Europe. She also has a long history of collaborations with violinist Joshua Bell (who she married in 2019, the same year she made her Kennedy Center and Carnegie Hall debuts), including two PBS specials and an upcoming “Voice and the Violin” concert tour.

Martínez and Bell came up with the concept for “Voice and the Violin” before the pandemic hit, so they were able to use the imposed isolation to their benefit, developing the idea into reality. “It has taken us a while to find music for voice and violin that we really like and that we want to bring together in a program,” Martínez said in a recent interview. “So we have to thank COVID for that — a little silver lining.”

The program debuted at the Ravinia Festival in August, which was also her debut with the Chicago Symphony Orchestra.

Growing up in Puerto Rico, Martínez was exposed to music from an early age, but the first opera she heard was one she performed in, as a boy! She was 18 or 19, she recalls, and was cast as the shepherd in the third act of Tosca. Typically, the character’s aria is sung by a boy backstage, but in this case, she was dressed like a boy and sang her solo on stage. “It was magical for me,” she said. “It’s addictive – the euphoria of being on stage and connecting to an audience and in character and pretending to be someone else.”

She went on to study voice at the Conservatory of Music of Puerto Rico in San Juan, which she did while simultaneously earning that environmental sciences degree from the University of Puerto Rico.

The reason for the science degree was obvious: “There are a lot of singers and a lot of [musical] aficionados, but no professional musicians in my family,” Martínez said, “so the thought of a musical career was terrifying. I didn’t even know what that would look like.”

It looks a bit like a ride on a rocket ship, actually.

Martínez went on to receive a master’s degree from Mannes the New School of Music in New York City, and, since her 2010 debut in the title role of Luisa Fernanda, at the Centro de Belles Artes de Puerto Rico, she has gone on to perform on many of the world’s top stages, from the Met and Carnegie Hall to the Hollywood Bowl and Italy. Widely regarded as one of the most exciting talents of her generation, Martínez has been highly praised for her warm lyric coloratura voice and captivating stage presence.

Martínez will captivate Boca on March 5, in the Festival’s “Opera Gala Concert With Larisa Martínez and Friends” – an evening of timeless classics from La Bohème to West Side Story, with Festival Orchestra Boca under the baton of Constantine Kitsopoulos.

Concerts are a maximum of 90 minutes without intermission.