The Band the Internet Built 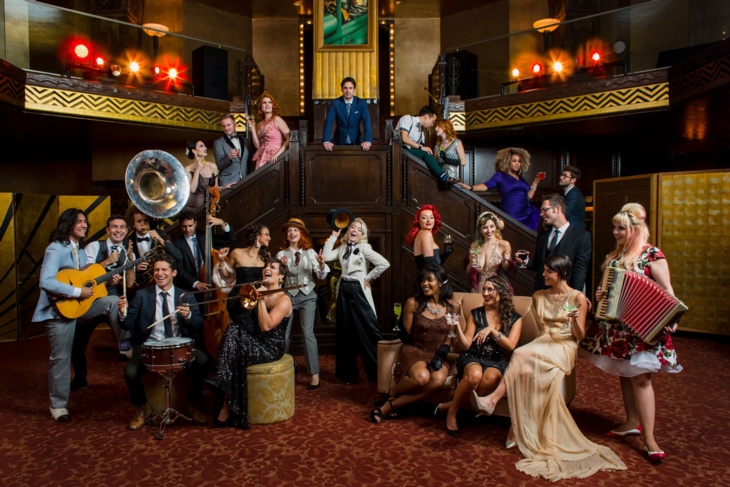 Back in 2009, Scott Bradlee was in New York City banging out a living playing piano at wedding and jazz clubs. And then he did something different: he uploaded a video to Youtube in which he did a ragtime medley of 1980s hits, including riffs on Journey and Bon Jovi.

“People really ate it up,” Bradlee told a New Jersey paper a few years back.

From there, it developed into Bradlee and college musician friends crafting and posting creative covers of modern hits recast through a retro lens. Youtube popularity and virality ensued, and in 2011 Bradlee founded Postmodern Jukebox. It was to be the furthest thing from a cover band, creating what Bradlee called "an alternate universe where the songs of today were actually written half a century ago."

Their first viral video – Robyn Adele Anderson’s 2012 cover of Macklemore & Ryan Lewis’ Thrift Shop, had over a million views in its first week, and four million in its first year (it has 16 million to date).

Over the next few years, PMJ’s weekly videos became more elaborate, more polished, and ridiculously popular, regularly racking up over a million views.

By late May 2018, PMJ had surpassed 1 billion (that’s with a B) views on Youtube, featuring an astounding range of famous musicians and vocalists on covers that wow viewers with their creativity, style, and fun.

Their channel currently has 4.44 million subscribers.

Interestingly, Bradlee loathed his piano lessons when he was a kid. Until, that is, he heard Gershwin’s Rhapsody in Blue when he was twelve. He was intrigued at how it injected sensibilities of jazz and ragtime into a classical template. So he taught himself to play ragtime and jazz piano by listening to cassettes and CDs borrowed from the library.

Today, Bradlee and PMJ tour widely around the US and the world, drawing huge crowds for their reinvented masterpieces and their energetic shows. And of course they continue to post new, weekly videos, along with a range of online contests and projects.

PMJ brings their alternate universe to Festival Boca on March 8, closing out our Season of Heroes with a rip-roaring 20s masterpiece that will help us blast into spring with style.

Here is PMJ's most popular video to date:
a 2015 cover of Creep (Radiohead) by Haley Reinhardt. 73 million views.