When the Music is the Star of the Movie 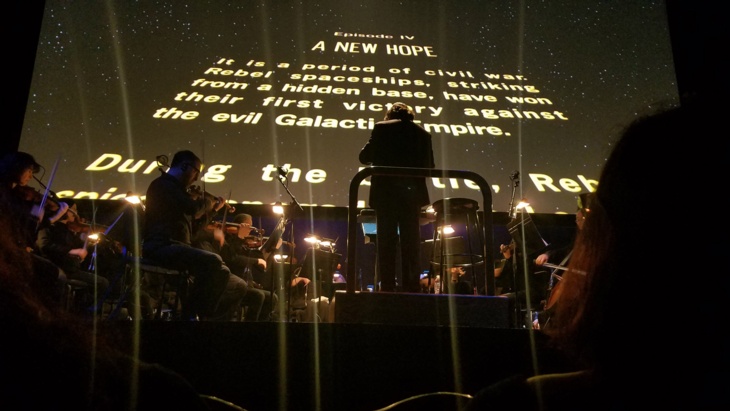 Festival of the Arts Boca designer Eileen Shine saw Constantine Kitsopoulus conduct the NJ Symphony in a performance of Star Wars: A New Hope, the show that will be coming to Boca on March 1, 2019. We asked her to tell us what it was like.

I was 11 when Star Wars first opened across America. I vividly remember the opening scene, with a gigantic spaceship that filled the screen. From that jaw-dropping moment all the way to the credits, the film was an instant hit and a lasting legend — Star Wars changed the movies for everybody.

Well, maybe not everybody. I recently discovered that my own parents had never seen Star Wars. Seriously! Nevertheless, it was my Mom who came up with the idea of taking my family to see Star Wars in concert. My father, who prefers histories to science fiction, wanted to know what timeframe the movie takes place in. I tried to explain: “It was a long time ago in a galaxy far, far away…”

So that’s how it came to be that I found myself with my husband, my eight-year-old daughter and my parents sitting in the third row at the Count Basie Theater in Redbank, NJ. Just a few yards away from us hung a huge movie screen above dozens of chairs set up for the NJ Symphony Orchestra. The musicians were taking their seats, warming up their fingers, making last minute notes. There was a lot to watch already, and the anticipation was starting to build.

Then it was showtime! With no formal introduction, conductor Constantine Kitsopoulos stepped out onto the stage, raised his baton, and the orchestra exploded into the 20th Century Fox fanfare, followed by the famous title scene, and away we went!

Hearing Star Wars played live places the soundtrack itself at center-stage, demanding its audience to pay attention to it in a new way. Forget Luke and Leia - John Williams is the star of this film. And it’s not just the obvious moments when the good guys win or when Darth Vader appears, it’s also the subtle moments you notice like never before, how the music brings depth to the story’s nuances, exactly as it’s meant to do. For myself and my husband, having grown up with this film as a staple reference ingrained in our minds, this was a new and exciting way to spend time with an old friend.

So what about the rest of the family? My daughter is not new to Star Wars, but this was her first symphony, and she loved seeing all the violins and cellos - so close and so many of them. And she got a toy violin as a souvenir. Mom and Dad loved the music, but being new to the film had a harder time following the story. This might have been our location so close to the orchestra, (or that they’re both over 80) but more likely it was because the music was truly the star that afternoon, and it was hard not to focus on the sound alone. Mom plans to rent the film soon to better enjoy the famous story. As for Dad? Well, science fiction still isn’t his thing, but he was very interested in the spring schedule of the NJ Symphony.

As for me, I will never watch Star Wars again without hearing it in its full orchestral majesty. I can’t wait to see Empire Strikes Back at the symphony!

This artist has no upcoming events.